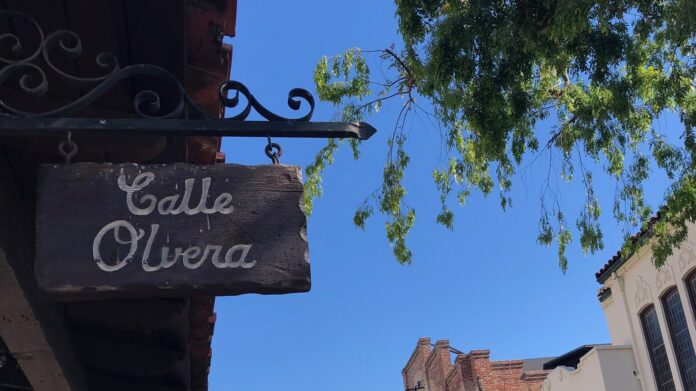 “A Spanish American social and commercial center … would furnish Los Angeles with the greatest tourist attraction she may ever have,” Christine Sterling (aka the “Mother of Olvera Street”) wrote in a 1926 journal entry.

Just 600 feet long, LA’s Olvera Street is the oldest street in the city, a brick-paved lane that functions as a marketplace, theme park, and a living museum. The street as we know it today — an idealized re-creation of an open-air Mexican market — was actually the brainchild of a divorced socialite from San Francisco who’d never been to Mexico.

But as with so many places in LA, the history of Olvera Street is complicated. Though created according to the vision of a white outsider, the street reflects and preserves the legacy of a once-Mexican city, and has since been claimed by generations of Latino Angelenos as their own.

This portrait of Christine Sterling was taken in the 1920s. Born Chastina Rix in Oakland, California on November 5, 1881, she changed her name to Christine as a teenager. After a brief first marriage, Sterling wed attorney Jerome Hough. In 1920, they moved to Hollywood with their two young children. Hough abandoned the family and […]