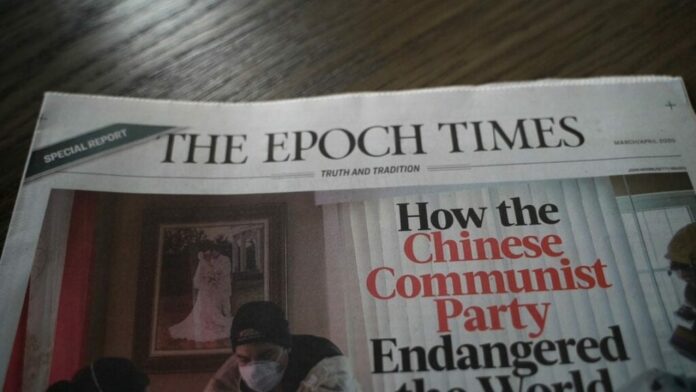 There are 23 million Asian-Americans, a third (30 percent), of whom live in California.  Recently, the Biden administration signed into law a bill that addresses hate crimes against Asian-Americans.  This is the first significant piece of legislation Congress has taken since the onset of the coronavirus pandemic, which has led to an alarmingly high rate of violence, harassment and intimidation against people of Asian descent.  Gruesome attacks on Americans of Asian-descent are up by 150 percent this past year, particularly among women and the elderly.

Yet this commendable move by Congress and President Biden highlights an irony brewing in our nation’s Capital.  While policymakers transcended political ideologies to pass this new, bipartisan bill, the House of Representatives revoked the press credentials of the The Epoch Times, the leading newspaper for Chinese-Americans.

The Epoch Times has not been given a justified reason for the cancellation of its press credentials, which effectively bans any Epoch Times reporter from having access to report on the actions of Congress, the White House, or other federal building where press credentials are required.

The D.C. press ban on The Epoch Times should not be ignored by members of Congress, as the action amounts to censorship in our own American backyard.  Never has it been more important to enhance journalistic coverage of ongoing atrocities and human rights abuses by the CCP.

Read Also  Baby Formula Crisis: Between Parents and the Oligopoly

The Epoch Times serves as the voice for Asian Americans. It is the largest and most widely read paper of the Chinese diaspora in America.  In China, it serves as the only free and independent media for the people of China whose media sources are otherwise controlled by the Chinese Communist Party (CCP).

It was founded by Chinese citizens who escaped from mainland China just a few years before Tiananmen Square, and has since consistently produced investigative reporting on events in China.  Its voice of freedom reaches millions of Chinese language readers across the world, and the publication pushes back against CCP propaganda. Events in Hong Kong indicate that the CCP has taken notice.  Recently, unknown assailants destroyed The Epoch Times’ printing press.

Today, The Epoch Times is one of America’s fastest growing news outlets with an impressive readership particularly in states such as California, Florida, and Texas.

In the United States, the CCP is becoming increasingly confrontational and brazen in its efforts to maintain control of its citizens—both abroad and within the United States.  The D.C. press ban is silencing the Asian American voice.  Meanwhile, the CCP is infiltrating and manipulating U.S. interests in our news outlets. According to VOA, in June 2020, the Chinese government-owned China Daily disclosed under FARA that it paid $19 million to U.S. media between November 2016 and April 2020.

Regardless, if you agree or disagree with the editorial content of The Epoch Times, this matter centers on free speech and a fair press, which should be of interest, and concern, to all Americans.  This trend is concerning to many in the migrant community, including myself.

Other media outlets are in the queue to be silenced by their governments. As I share these thoughts, the government of El Salvador is attempting to silence El Faro, a publication based in Washington D.C.  Many similarities parallel the efforts to silence The Epoch Times.

If the Epoch Times succumbs to these attacks, and frankly attacks from within our own democracy, who might be next?

I ask those in the migrant and immigrant community and U.S. diasporas – be it Asians, Hispanics, Black, Indigenous, to the Persian community – to write House Speaker Nancy Pelosi and ask the Congresswoman to reinstate The Epoch Times press credentials.

Francisco Rivera is currently President of the Central American National Round Table. He worked as a journalist from 1992 to 2000, and was a contributor to the editorial pages of La Opinion and Hoy newspaper.