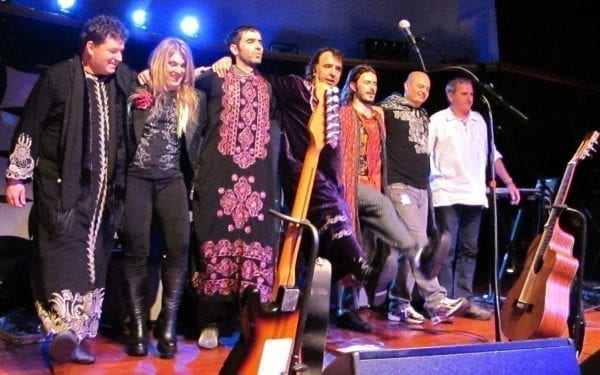 Few musical bands have the merit of being little known yet influential like Os Mutantes of Brazil. Although that part about being little known is already history. Precisely because history seems to be giving back the fame that it was once denied.

“It’s fantastic, it astounds me,” said Sergio Dias, the leader of Os Mutantes, in a phone interview from Brazil. “The music has its own life, doesn’t it?”

Dias was trying to explain the band’s renewed success.

Os Mutantes emerged in 1966 in San Pablo, Brazil. The group was made up of brothers Arnaldo Baptista and Sergio Dias and the voice of Rita Lee. Soon they incorporated the musical movement called “Tropicalia”, which unified rock with traditional Brazilian music.

Prominent Brazilian musicians collaborated with Os Mutantes, who besides their powerful music would stand out because of the extravagant outfits worn by its members.

In 1972 Rita Lee left the band to continue her career as a soloist, while Baptista and Dias continued in a line of progressive rock.

Although it had little commercial success outside of Brazil, Os Mutantes influenced musicians internationally like David Byrne, Beck Hansen, Kurt Cobain and Devendra Banhart. In 1998, Beck released the album Mutations which included the single Tropicalia.

These influences transformed themselves under pressure. That’s why in 2006 Os Mutantes reunited and performed in London, followed by thousands of fans. As a result of that, they were invited to perform in the United States and Brazil.

“The young people are the reason we came back,” Dias said regarding the new generation of rockers who claim to be their fans. “We’ve changed so much and we’ve also changed musicians, but I never dreamed that this could happen to us.”

To mutate is to change

The band appears to have changed as much as is indicated by their name: The Mutantes. To mutate is to change, move, a natural process in music.

“Although I would like to associate myself with the kaleidoscope because it’s also color,” said Dias who enjoys dialogue mixing Spanish and English and his contagious laughter.

The lyrics of the songs by Os Mutantes just like its dress appear strange, although they reveal nonconformity, criticism and juvenile passion.

Those ingredients were not to the liking of the government of Brazil, which suffered under a military dictatorship from 1964 to 1985. Many artists were expelled from the country.

Os Mutantes sorted through the condemnation and the pressures of success.

After the band broke up in 1978, Dias emigrated first to Italy and afterwards lived in New York for 10 years. There, he worked on musical producti ons. And now, Os Mutantes has a new CD called “Haih”, whose songs will be part of their performance at the end of the month in California.

“The name means ‘crow’ in the Shoshone language and we included varied songs on the CD,” Dias said. For example, “Anthems of the World” is an edition made up of various anthems, especially from Brazil, the United States and Russia. “It starts with a discourse by Putin (Russia’s president), you know the United States looks very lonely without the Soviet Union,” Dias said with a hint of craftiness.

One of the most significant songs is “Samba a Fidel”, in which Os Mutantes mixes tones, idioms and political messages. Dias seems to enjoy himself when he talks about the song, whose message he does not reveal.

“That’s like a lot of our music, something of a collage. We also talk about Brazil, Argentineans, Bush and Obama.” He composed it in Miami, he says. It was when rumors about the death of Cuban leader Fidel Castro filled the various media of that city.

In keeping with the theme, Dias asks himself what is happening with the world. Although he prefers a return to music.

“In Brazil music has personality but it is flexible, it receives and integrates a lot of ordinary material.”

Outside Lands Festival took place in San Francisco over three days from August 28th through the 30th. Scores of musicians, bands and theater groups were in action simultaneously on various stages, including Os Mutantes.

HispanicLA.com will post a photo gallery directly from the festival.