I have many fond childhood memories of Dodgers games. I was never a big baseball fan growing up. Even now I have trouble calling it a sport. There are only two options for a player. Either an overweight, overpaid lump that parks himself in some corner of the field. Or to be some raided out, overpaid mutant. Either way, going Dodgers games was never about the game.

Thus, it was about the food.

You go for the Dodger Dog (grilled, not steamed), peanuts, Carnation Ice-milk, sneaking a taste of dad’s beer etc… This was years ago when the menu was much more concise. 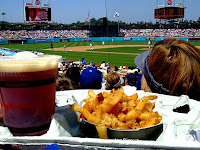 time I went to a game there were personal pizzas, King Taco, Krispy Kreme, and now there’s probably sushi and rack of lamb. In any event, the game was always incidental to the occasion. Dodgers games are an inexpensive. They are a local opportunity for Mexicans to get the family and friends together. And usually without having to entertain one another.

No one needs to kill a pig or spend the entire night prior making tamales. Clean up is handled by a third party and because of the price of beer it’s rare that your dad and your tio will get too drunk and end up getting in a fight.

Mexicans have a complicated relationship with the Dodgers. Dodger Stadium stands in Chavez Ravine, which years ago was a community of Mexican immigrants. For decades the city and developers wanted the land and were willing to do just about anything to get it short of paying the tenants anything close to what the land was worth.

There is plenty of literature about the Battle of Chavez Ravine but for a great comprehensive history of Southern California I would look to a book by Carey McWilliams called Southern California: An Island on the Land. Chavez Ravine is also a significant locale that is associated with the Zoot Suit Riots. In the end the Mexican community was forced to relocate and Dodger Stadium was erected.

Not the type of people to hold a grudge, plenty of Mexicans make it out to Dodger games. They help make every home opener a sell-out. Much of that capacity crowd is found in the Pavilion.

The Pavilion makes up the seating behind the outfield and since these tickets have always been relatively inexpensive (currently $13) they attract a crowd looking for a value. If you’ve got five kids and ten nieces and nephews fresh out of catechism, this probably applies to you. As such, the patrons of this seating area tend to get a little rambunctious, which is why they stopped selling beer there for quite some time.

Now, on certain game days, you can get a ticket for $30. It comes with all you can eat hot dogs, nachos, cokes, water and peanuts. You still have to buy the beer. In my personal opinion I think it’s great that you can still get into a ballgame anywhere for just $9: that’s for a seat in the nosebleeds purchased at least a day ahead of time, and this is at the third oldest ballpark in the Major League. 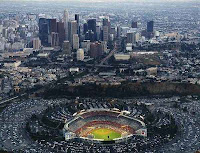 I also do not want to fail to mention the incredible contribution of famed Mexican Dodger pitcher Fernando Valenzuela. He was known for his wicked screw-ball and is the only pitcher to have won both Rookie of the Year and the Cy Young award ushering in an era of Fernandomania.

He helped the Dodgers clinch the 1981 World Series and went on to set a number of records. Fernando “El Toro” Valenzuela went on to play for other teams in other ballparks but he became a legend playing at Dodger Stadium.

After the game everyone piles into the car, maybe you fill up at the 76 station in back of the parking lot and ride the slow wave of traffic back onto the 101 Freeway. If you were smart you hit up Phillipe’s for a French dip sandwich before the game. And if you’re brave you’ll stop by the Original Tommy’s on W Beverly on the way home.