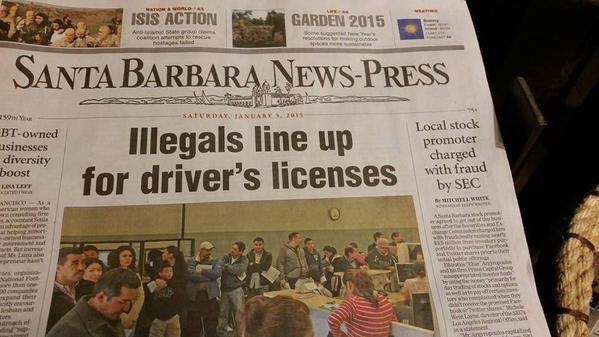 The battle over immigration sums up to the control over the semantics, the words that define the discussion. First among them, the I word: illegals. The use of “illegals” already contains the condemnation, the verdict, the totality of hatred, the refusal to listen, the nature of the swift, violent response that the word generates.

Here is the reaction of NAHJ – the National Association of Hispanic Journalists – to the use and abuse of the term by the Santa Barbara News-Press.

The following text is by Mekahlo Medina, president of NAHJ

On the first of January, undocumented immigrants in California were able to apply for driver licenses. News organizations across the state fairly and accurately reported on the new law and its impact to the community.
But the Santa Barbara News-Press decided to politicize an already political issue by using the terms “illegals” and “illegal aliens” in reporting on the story.
I reached out to the publisher of newspaper in an email and I am still waiting on a response.

Below is my email.