The Mummies of Guanajuato Stole my Hat 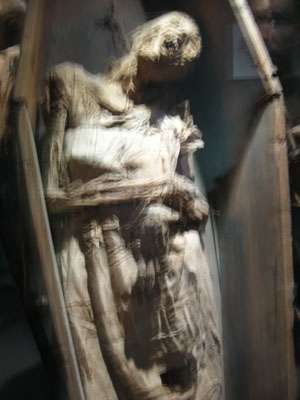 My heart is pumping. I am as excited as a little kid. I’m waiting in a long crowded line to see the mummies of Guanajuato. I have wanted to come to see them ever since I was a little kid, and I finally will – in just a few minutes.

Jerry, Tom and I left Mexico City at 5am so that we could arrive early at Guanajuato, a colonial and historic city in central Mexico. Two hundred and thirty miles later, around 10 in the morning we made it.

Before going to the Museum, we went to see the statue of El Pipila, a local hero in Guanajuato. In 1810, at the beginning of the Independence movement, El Pipila, with a long flat stone tied to his back to protect him from the bullets of the Spanish troops, set fire to a grain warehouse that the Spaniards were barricading. That warehouse is now called La Alhódiga de Granaditas and is now a museum.

The statue of El Pípila is on the biggest hill in Guanajuato. From the top, I get a glimpse back in time, to 1554. I can see the old Spanish architecture, the Cathedral, the University, but I can’t see any cars. People drive underground. Everything in Guanajuato has been preserved as if we were still in the Colonial period.

After visiting El Pipila, we walk down tiny cobbled streets to visit the Basilica, Teatro Juárez, and the market. In the city, where time has stopped, the three of us sit down, slow down and admire the flowers crawling out of the windows of old Colonial homes.

But not for long.

Soon, I get anxious; I want to see everything. We go to El Callejon del Beso, a narrow alley with two balconies separated from one another by less than a meter and a half. There, dozens of kids want to tell you the alley’s story in exchange for some pesos. According to legend, a young lady was prohibited to see her boyfriend by her father. Her boyfriend bought the house with a balcony that was an arm’s reach from her own balcony.

When the girl’s father realized what was going on, he killed his daughter. In El Callejon del Beso (The Alley of the Kiss), couples young and old, line up to kiss one another from across two balconies.

Jerry and Tom, my traveling companions, want to visit the home of Diego Rivera, the famous Mexican painter and muralist who was born in 1886. While they wander around the museum, I talk to the cashier who has worked there most of her life. She tells me that tourists from all over the world come to see the house. Recently, a 90 years old man from New York came.

He looked sick and fragile and used a cane. He told the cashier that in 1933 he met Diego when he was painting a mural in New York at the Rockefeller center. The mural was destroyed a year later because Diego Rivera included a portrait of Communist Party leader Lenin. Before leaving the museum, the old man told the cashier that now he could die in peace. He did not want to go before visiting the house where Diego was born.

Without a doubt, the place I really wanted to see was the Mummies museum. In line, my heart raced. When I was little girl, I saw many Mexican horror films about mummies.

Inside, behind a glass, I see bodies of youths, elders and babies – tiny little babies. Some of them have clothes that have torn with time. Some have shoes and socks. I wonder why people bury their dead with socks. The mummies look like they were made out of fragile paper – papier mache. I get the feeling that if I was to touch one, it would turn into dust.

The museum guide says that years ago the mummies were not behind glass and that a skeptic tourist cut a piece of skin off a mummy just to prove they were real and not a trick. So the museum put up a glass wall.

There’s about a hundred mummies. The guide says the mummification occurred naturally – due to the conditions of the local cemetery. There was no chemical process to preserve the bodies. He adds that these are the bodies that nobody claimed. He points to one of the bodies and says it was a French doctor whose family never claimed his body. It is hundreds of years old.

I wonder if the doctor would have minded being put up on display. I wonder what kind of life he had and what sort of death. I would like to know the story of each mummy in the museum.

I look at the mummies for a long time. At some point I notice that I am almost alone. I walk quickly through all the different rooms to get to the exit. Just as I’m about to leave, I realize that I do not have my hat. It was a birthday gift, so I go back through every room, looking for my hat. I go to the foyer. I talk to the employees and to the tourists. Nobody has seen my hat.

Outside, Jerry and Tom are waiting for me.

I tell them, I lost my hat.

“Maybe next time you return to the museum, you’ll see one of the mummies wearing your hat,” says Tom.