A Path with Heart: Bus Robbery 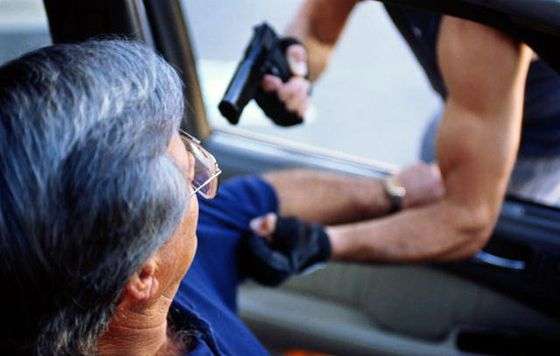 It was around one AM last Friday. My mom was on a charter bus, traveling with a group of fellow Mexican merchants who buy merchandise in Guadalajara for their small businesses in Mazatlan.

Two or three hours before arriving at Guadalajara, a patrol car stopped the bus. My 72-year mother, who was sitting up front, quickly realized that the two police officers were impostors. With guns raised and yelling, “This is an assault,” the two men entered the bus. They hit the driver and his aide, and then ordered the driver to continue driving.

Then, they assaulted the frightened passengers:

The robbers went up to each man and woman, ordered them not to look up at them, to stay silent, and to raise their arms. Then the robbers frisked them for money. They took purses and wallets.

When the robbers approached my mother, she was praying silently, asking God to make her invisible and asking for forgiveness for not being a good mother nor a good daughter. One of the robbers put a gun to her head. He touched her from her toes up to her head. My mother had her purse tied to her waist. The thief cut it off rapidly with a knife. She remembers feeling the cold knife touch her skin. He could have wounded me, she said.

Everything happened very quickly. After the men took everyone’s money, they asked passengers not to make a police report. When they left the bus, everything turned to chaos. Everybody was crying hysterically. Some suffered panic attacks. My mom, who is a very strong, cold and dry woman, did not shed a tear. More than one woman asked her why she wasn’t crying. “Why do I have to cry?” she responded.

The next day in Guadalajara, she felt like she had a hangover. The company did not take responsibility for the assault. My mom does not believe this was something orchestrated between the drivers and robbers. If it was, the robbers wouldn’t have hit them. However, she said corruption has escalated to high levels in Mexico. Bus drivers have been forced to pay a quota to soldiers that are on drug checkpoints along the highways. She has witnessed an argument between a soldier and a driver over 500 pesos (around 45 dollars) per bus.

My mom is back to Mazatlan and is still nervous about the assault. However, I found her affectionate with me, which she isn’t normally. I also found her to be happier.

I asked her how much she lost. She said she lost $100 pesos (around 8 dollars) and a couple of fake credit cards that she had in the purse tied to her waist.

She replied, “I saved all my money because I bandaged it to my arms. The robbers touched my whole body, but they asked me to raise my arms. They never figured out where my money was.”

My mom and a woman who put her money on her boots saved their money. The rest had to borrow money in Guadalajara, she said.